My inputs in today’s Mumbai Mirror about Unhappy India… 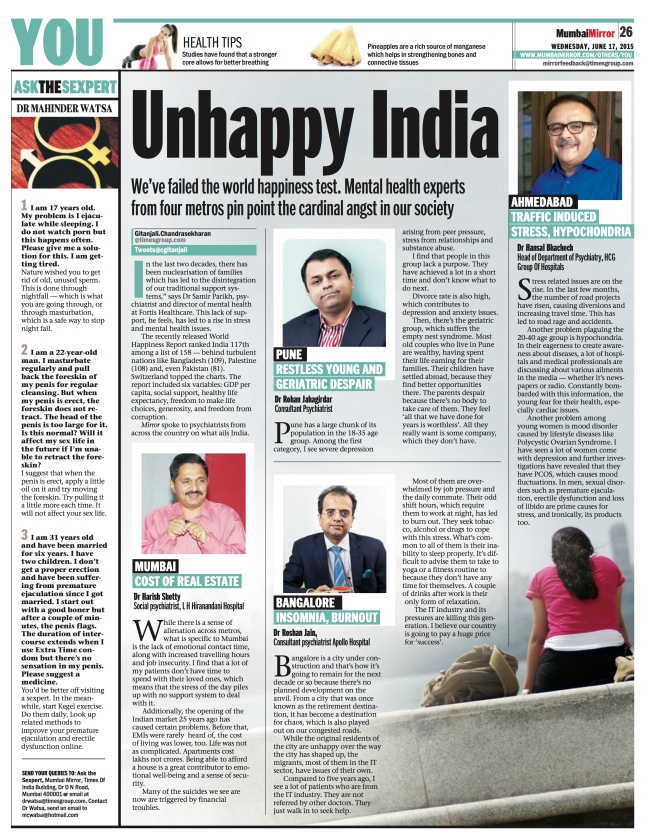 Jun 17 2015 : Mirror (Mumbai)
Unhappy India
We’ve failed the world happiness test. Mental health experts from four metros pin point the cardinal angst in our society
In the last two decades, there has beennuclearisation of families which has led to the disintegration of our traditional supportsystems,“ says DrSamirParikh, psychiatrist and director of mental health atFortis Healthcare. This lack of support, he feels, has led to a rise in stress and mental health issues.The recently released World Happiness Report ranked India 117th among a list of 158-behind turbulent nations like Bangladesh (109), Palestine (108) and, even Pakistan (81).Switzerland topped the charts. The report included six variables: GDP per capita, social support, healthy life expectancy, freedom to make life choices, generosity, and freedom from corruption.Mirror spoke to psychiatrists from across the country on what ails India.MUMBAI COST OF REAL ESTATE

While there is a sense of alienation across metros, what is specific to Mumbai is the lack of emotional contact time, along with increased travelling hours and job insecurity. I find that a lot of my patients don’t have time to spend with their loved ones, which means that the stress of the day piles up with no support system to deal with it.

Additionally, the opening of the Indian market 25 years ago has caused certain problems. Before that, EMIs were rarely heard of, the cost of living was lower, too. Life was not as complicated. Apartments cost lakhs not crores. Being able to afford a house is a great contributor to emotional well-being and a sense of security.

Many of the suicides we see are now are triggered by financial troubles.

Pune has a large chunk of its population in the 18-35 age group. Among the first category, I see severe depression arising from peer pressure, stress from relationships and substance abuse.

I find that people in this group lack a purpose. They have achieved a lot in a short time and don’t know what to do next.

Divorce rate is also high, which contributes to depression and anxiety issues.

Then, there’s the geriatric group, which suffers the empty nest syndrome. Most old couples who live in Pune are wealthy, having spent their life earning for their families. Their children have settled abroad, because they find better opportunities there. The parents despair because there’s no body to take care of them. They feel `all that we have done for years is worthless’. All they really want is some company, which they don’t have.

Bangalore is a city under con struction and that’s how it’s going to remain for the next decade or so because there’s no planned development on the anvil. From a city that was once known as the retirement destination, it has become a destination for chaos, which is also played out on our congested roads.

While the original residents of the city are unhappy over the way the city has shaped up, the migrants, most of them in the IT sector, have issues of their own.

Compared to five years ago, I see a lot of patients who are from the IT industry. They are not referred by other doctors. They just walk in to seek help. Most of them are overwhelmed by job pressure and the daily commute. Their odd shift hours, which require them to work at night, has led to burn out. They seek tobacco, alcohol or drugs to cope with this stress. What’s common to all of them is their inability to sleep properly. It’s difficult to advise them to take to yoga or a fitness routine to because they don’t have any time for themselves. A couple of drinks after work is their only form of relaxation.

The IT industry and its pressures are killing this gen eration. I believe our country is going to pay a huge price for `success’.

Stress related issues are on the rise. In the last few months, the number of road projects have risen, causing diversions and increasing travel time. This has led to road rage and accidents.

Another problem plaguing the 20-40 age group is hypochondria.In their eagerness to create awareness about diseases, a lot of hospitals and medical professionals are discussing about various ailments in the media -whether it’s newspapers or radio. Constantly bombarded with this information, the young fear for their health, especially cardiac issues.

Another problem among young women is mood disorder caused by lifestyle diseases like Polycystic Ovarian Syndrome. I have seen a lot of women come with depression and further investigations have revealed that they have PCOS, which causes mood fluctuations. In men, sexual disorders such as premature ejaculation, erectile dysfunction and loss of libido are prime causes for stress, and ironically, its products too.

One more emotional rollercoaster from Zoya Akhtar. She took us on road trip in ZNMD and now she has set us on cruise trip. Although means of trips are different, conflicts remain the same. Treatment is different but flavour remains the same. Destinations are different but outcome is same, trip changes the tripper’s outlook towards life.

Family drama which may make you think beyond what you see. Predictable and slow paced story sails in lighter tone. Many times, story fails to hold your attention but thanks to exotic locations for filling the gaps. Climax proves it as Hollywood style Bollywood piece 🙂

Dialogues are witty and meaningful, likely to stimulate you to think beyond words. If you are thinking and/or analytical type, post movie close your eyes, think beyond what you have seen and try to relate, of course after going back home and not in cinema hall 🙂

Performances are excellent. Background score is an average type. Title song is not a part of the movie.

In short, Well directed story which hardly have any interesting content. Packaging is the main strength of this film and that will make this film to earn 🙂

Packaging makes it good entertainer, will relax you and bring smile on your face.

I’m not a paid or commercial movie critic, neither this is technical review of the movie.This share is to help like-minded friends for spending their money and time effectively 🙂

Posted by Dr.Hansal Bhachech on June 9, 2015 in Reviews and Movie Wisdom